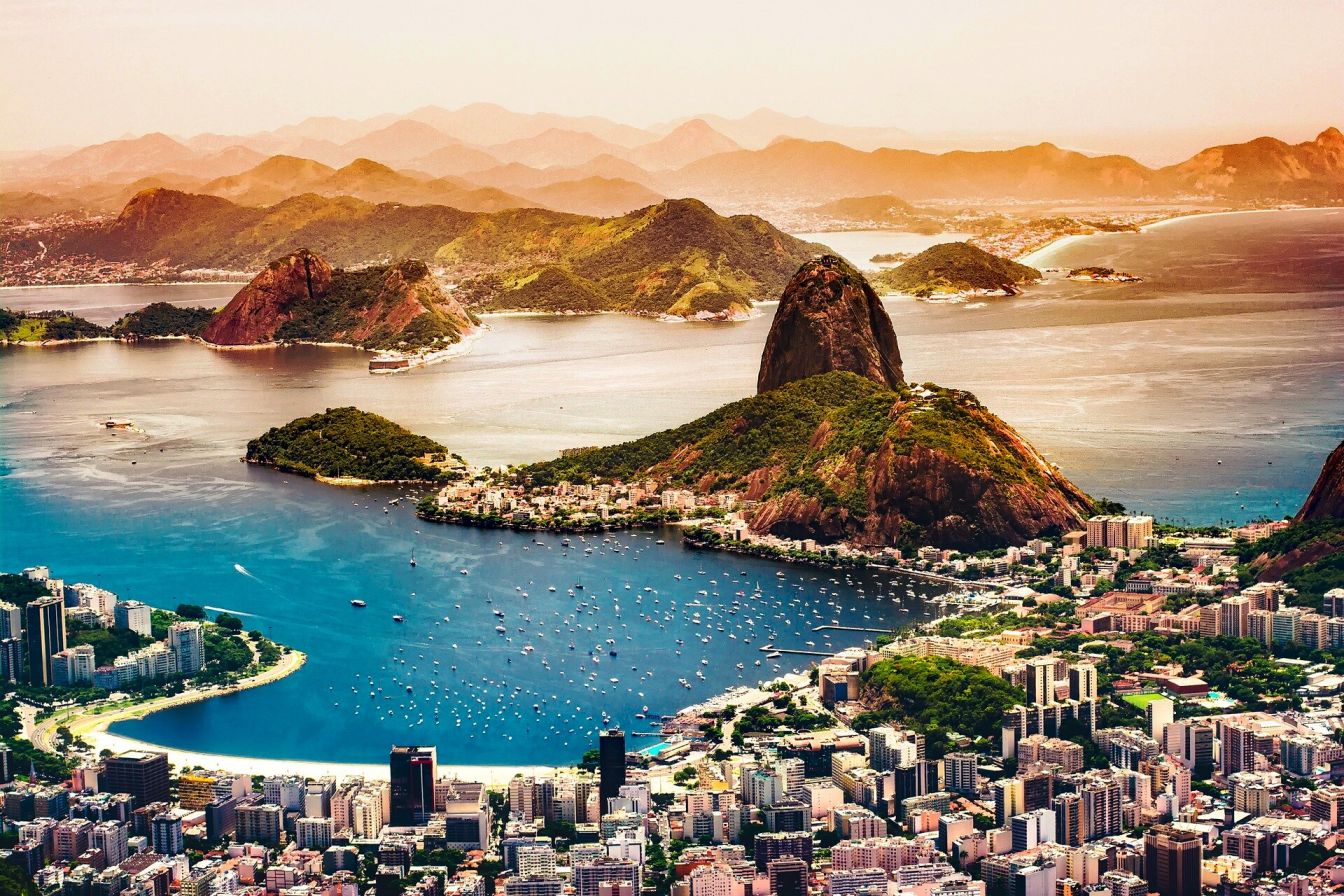 Brazil ‘s shoreline is 4,577 miles (7,367 Km) long – or 5,281 miles (8,500) long if you consider all kinds of coastal features such as bays, gulfs etc. As a general rule, the Brazilian coast faces the South Atlantic Ocean , as only a small part of its shore (in the far north of the country) is bathed by the Caribbean Sea . The Brazilian coast’s coordinates range from 04º30’N down to 33º44’S, located therefore for the most part in the inter-tropical zone.

Indeed, Brazil has beaches with either calm or rough water, either warm or cold, located in small villages or dazzling big cities, appropriate for sports or for rest. As a general rule, the water in the northeastern region is usually calmer and warmer, whereas in the south and southeast the water is comparatively colder and rougher. All around the country, the visitor can find beaches suited for diving, surfing, fishing and sailing. Summer in Brazil goes from December to March. Nevertheless, the majority of our beaches offers a pleasant climate throughout the year.

The original inhabitants of what is now Brazil were seminomadic Native Americans. Europeans first landed in 1500. The first Portuguese colonial government was established in 1549. Large numbers of African slaves were brought in to provide labor. The founding of São Paulo occurred in 1554, of Rio de Janeiro in 1567. Portugal and Brazil with it, was ruled by Spain from 1580 to 1640.

The return of Portuguese sovereignty was followed by expansion into the interior, leading to a gold rush in 1693. Development of the lucrative coffee- and sugar-growing industries began in the 1700s. Prosperity brought settlers who were encouraged by the government in Portugal. The government also freed Native American slaves.

In 1807 Rio de Janeiro became the seat of the royal government of Portugal, which had been driven from Lisbon by French emperor Napoleon I. King John VI returned to Portugal in 1821, making his son, Dom Pedro, later Pedro I, the regent of Brazil. When the Portuguese legislature tried to return Brazil to colonial status against the will of most Brazilians, Dom Pedro sided with the Brazilian nationalists, proclaimed the country’s independence, and become emperor of Brazil in 1822. Dom Pedro’s regime soon became unpopular, however. After losing a war with Argentina in 1827, he abdicated in 1831 in favor of Pedro II, who was then five years old. Pedro II became monarch in 1840.

Pedro II was an able ruler, and the country prospered and grew during his long reign, which continued until 1889. His government helped overthrow neighboring dictatorships and took a series of steps to end slavery, completing that process in 1888.

By then large sections of the population favored a republic. A military revolt led by Manuel Deodoro da Fonseca forced Pedro II to abdicate. Brazil was proclaimed a republic with official separation of church and state. A constitution like that of the United States was adopted in 1891, and Brazil officially became the United States of Brazil. Fonseca was elected its first president but soon ruled as a dictator, only to yield to another.

Order was restored during the administration of the first civilian president, Prudente José de Moraes Barros, and succeeding administrations struggled to strengthen the troubled Brazilian economy. World War I (1914-1918) caused an increase in demand for Brazilian products on the world market, and the Brazilian economy improved. Brazil contributed ships and supplies to the success of the Allied forces.

Brought to power by military revolt in 1930, Getúlio Dornelles Vargas ruled for the next 15 years. His government followed mixed policies of social reform and repression, and the economy continued to struggle. Woman suffrage and social security were established, but by 1937 Brazil was a totalitarian state. During this period, Brazil was friendly with the United States and other democracies but broke ties with the Nazi Third Reich because of German political activity in Brazil, including support of an open revolt.

Brazil sided with the Allies in World War II (1939-1945), again using increased world demand for raw materials to expand its economy. It contributed direct military support, access to bases, and vital supplies to the defeat of the Axis powers.

After the war, the Vargas regime loosened its political grip. National elections were scheduled for late 1945. Amid fears that Vargas would retain his dictatorship, opponents ousted him by a military coup. Elections proceeded, and former Minister of War Eurico Gaspar Dutra won the presidency.

Vargas was elected president in 1950, and his coalition government at once moved to balance the budget while improving the standard of living. It did not succeed. In 1954 military leaders forced Vargas to resign; he then committed suicide.

For the next three decades, Brazil suffered a series of unstable governments followed by military rule. Attempts to stimulate the economy with foreign loans foundered on sinking coffee prices. Rigorous austerity measures were abandoned. Pressured by the military, the legislature amended the constitution in 1961 to strip the presidency of most powers. Two years later the legislature restored presidential powers. Opposition parties were outlawed or refused to enter candidates in elections. Despite repression, unrest became widespread.

During this time, the economy grew, but the plight of the poor worsened. The Roman Catholic clergy criticized government failure to help the disadvantaged. Economic growth also brought inflation, high energy costs, and difficulties with loan payments.

Brazil returned to civilian rule with the election of Tancredo Neves in 1985. However, he died before taking office, and José Sarney became president. Faced with rising inflation and a huge foreign debt, Sarney imposed an austerity program that included introducing a new unit of currency. A new constitution restoring civil liberties and providing for direct presidential elections was enacted in 1988.

Fernando Collor de Mello was elected president in 1989. His term was marked by an anti-inflationary recession and by allegations of financial corruption. Shortly after Brazil hosted the United Nations Conference on Environment and Development, also known as the Earth Summit, in 1992, Collor was impeached. He resigned his post to Vice President Itamar Franco. In 1994 a plan to restructure and reduce Brazil’s foreign debt was implemented. In the same year, Brazil joined other Latin American and Caribbean nations by declaring itself free of nuclear weapons.

Cardoso’s administration found itself caught up in issues of land ownership and land use. By a 1995 presidential decree, Cardoso redistributed tracts of land from large, private estates to poor families. In 1996 he signed a decree allowing people other than Native Americans to appeal land allocation decisions made by Brazil’s Indian Affairs Bureau. The law was widely condemned by human rights, Native American, and religious organizations